The second edition is available now! 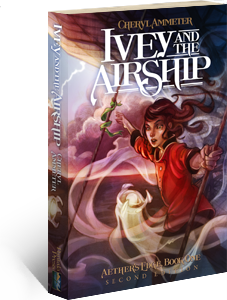 Coming of age presents a dilemma for Ivey Thornton. She’s a spirited girl with more than her share of strength and intelligence, but no interest in courtship or marriage. Ivey dreams of following in her father’s footsteps, tracking the unknown species of flora and fauna that threaten the world of Aether. Her plans are upended when Arvel Thornton mysteriously arranges her engagement to the reclusive heir of Fenchurche Industries. She boards the airship Monarch with the intention of helping Miles Fenchurche discover a happier future, as long as it doesn’t include her. But something evil has stowed away on Miles’ ship and if Ivey doesn’t learn how to trust him, the greatest adventure of her life might be her last.

The Updated 2nd Edition of Ivey and the Airship

Pantala Press has just launched the Second Edition of Ivey and the Airship! This version of the book includes:

The Aether’s Edge series is a pentalogy of Sci-Fi/Fantasy novels for young adults and up. The stories empower girls to follow their dreams and make the most of the world around them. In Greek Mythology, the word Aether describes a substance believed to occupy the universe beyond the worldly sphere. It is the rarified air, breathed only by the gods, and it happens to be the perfect medium for levitating a mystical airship.

The book is now available in both paperback and hardcover, with personalization by author Cheryl Ammeter.

Ready to enter the world of Aether? Take the leap into Ivey and the Airship in the Aether’s Edge Shop!