Ivey and the Airship – Aether’s Edge Book One 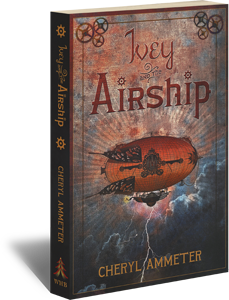 Ivey Thornton is a headstrong girl who refuses to accept the bonds of matrimony. Her dreams of adventure quickly turn into a series of nightmares when shape-shifting killers infest the airship Monarch. In her struggle to survive, Ivey learns the value of friendships based on respect and trust, and finds herself strangely drawn to the reclusive young inventor she never wanted to marry. This steampunk fantasy is book one of the Aether’s Edge series from Pantala Press, and is geared for readers age 12 and older. Ivey and the Airship can be ordered from Amazon, Barnes & Noble, and other major online book vendors.

A Message for E-Readers
Right now you can download Ivey and the Airship for only $3.99! Catch the Summer Reading Special for Kindle, Nook, iPad, and other eBook formats at Amazon, Apple, Baker & Taylor’s Blio Store, Barnes & Noble, & Kobo!

To order an autographed copy of Ivey and the Airship directly from Pantala Press, just click the “Buy Now” button. Be sure to list the names you’d like to be included in your personalized autograph in the field marked “Enter name(s)” below your shipping address. Books will be signed and shipped as soon as possible.

Purchase Ivey and the Airship from Pantala Press for only $16.00 plus shipping: